Eloping on Your Wedding Day 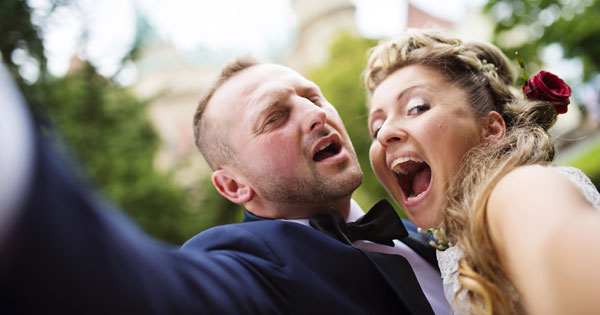 Eloping / Elopement: Running away to get married without all the fuss, family feuds and huge spending – is nothing new.  The Marriage Act was in the 17th Century, when Lord Hardwick passed a law that any parents in England or Wales had the right to object to and prevent the marriage of their children under 21 years of age.  In a time when people usually married quite young, before they were 21, this was a drastic new law.  I wonder what made him bring this to pass? Maybe a young man held a ladder to his daughter’s window and they eloped in the night?

The  Village of Gretna Green is located in southern Scotland, right next to the town of Gretna.  This little hamlet was not under English or Welsh law, and soon became a runaway spot for young lovers looking to marry.  Even now, the town hosts over 5000 marriages a year, because of its reputation for hassle-free weddings in a romantic atmosphere.  The term “going to Gretna Green” is common now, and stands for any elopement.

If Las Vegas isn’t your style, consider a wedding and honeymoon in beautiful rugged and rural Scotland.  Gretna Green is right on the border of the North of England and the South of Scotland, easily accessible by car.  If you are taking the train, then the city of Carlisle, Scotland is your nearest station.

Couples from all over the world choose Gretna Green as their wedding destination, and the process is made simple by the local authorities.  A certificate of no impediment is required by the registrar to grant permission for people without British citizenship to marry there.

So if you’ve ever really thought about running away to get married, know that Gretna Green may be the place to go.  There’s a lot to be said for a big family wedding if you have a big family to help pay for it, but if that’s not your situation, and the thought of $60,000. for a one-day party feeding 100 people you hardly know makes you cringe, then elopement may be for you.  It’s one day, yes.  It may be the one day you get to do something you really want in a place where many couples have done exactly that, too.

Of course, if you need to legalize an Elopement before running, we are actually hear to serve you as we offer a very simple wedding package – The Elopement!  Simple quick and of course fully legal!  Then, if you’re off to a remote enchanted island and want to celebrate with friends or family, no worries!