It’s almost impossible to imagine a wedding without some long lasting family and cultural traditions, even within . . . a post-modern world. Often a mini-event, a ceremony within a ceremony or simply honouring those who have gone before us, your wedding can be as fresh as today, with a touch of historical ‘class’ as you celebrate with tradition!

Ironically these days, a tradition often is seen as something new, unique and special, as many have never witnessed that special tradition you wish to include, providing you with a one-of-a-kind wedding, and in fact may start a trend among your friends in attendance and about to celebrate their own wedding very shortly.

Let’s begin with the reception:

The Grand Entrance: Yes, the spotlight is on you! Traditionally the Bride and the Groom and the entire wedding party are introduced as they enter the reception hall and make their way to the head table. From Flower Girls to Ring Bearers, Bridesmaids and Groomsmen with the best for last; the Bride and the Groom. There is really no tradition that states the Bridal party need to be part of this grand entrance, however it is a way for the Bride and Groom to honour those who have shared uniquely in their wedding ceremony.

The Grand Introduction: In a formal setting it is customary to introduce the names of each person fully and when possible under the title of Mr or Mrs (Miss). Depending on Bride’s desire to keep her maiden, Brides are generally introduced with their new (taken) name as Mr & Mrs.

The First Dance: An evening of dance begins with the Bride and the Groom sharing the spotlight once again. Traditionally that first dance began shortly after the meal and a brief program of toasts and speeches were made. However many Couples desire to meet their guests following dinner and so the first dance has occurred before dinner, opening up the dance floor to all their guests immediately following dinner, even if they are unable to join in right away.

Traditionally, the second dance has seen the parents join their son and daughter and then their son-in-law and daughter-in-law as a welcome to their new family. This is of course a sensitive subject and may not be a healthy reality in light of step-parents. 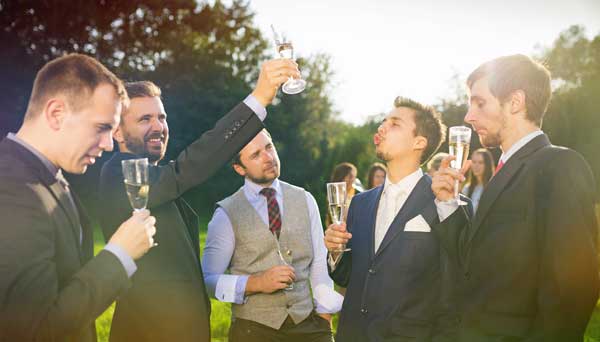 Making a Toast: Again looking at tradition, it is the Best Man who shares the first toast of the evening, often before dinner as the Bride and Groom have just made their Grand entrance. The toast is somewhat of a welcome, but highlights the beauty and importance of the Bride and Bridesmaids. The Maid of Honour generally has not needed to worry about making a toast, however more recently she (and the Bride) have requested their willingness to share in the ceremony as they toast the Groom and his groomsman. Since these two individuals have play a major role within the wedding and share a toast of similar style, they traditionally have be placed together before the dinner begins.

Following dinner, it now becomes the family’s turn to share in and invite others to share a toast with them as they continue the celebration. The order generally proceeds as:

Traditionally, the toasting end here . . . however many couples have a friend or family member that has been special and in fact instrumental within both their life’s and even their relationship leading up to their wedding day. This is a great time to ask them to share a story or two, and perhaps a ‘special’ toast to the Bride & Groom.

Next, we’ll look at Traditions involving the Cake, the Bouquet, the Garter and perhaps a few others . . .